Electric discharge machining (EDM), sometimes colloquially also referred to as spark machining, spark eroding, burning, die sinking or wire erosion, is a manufacturing process whereby a desired shape is obtained using electrical discharges (sparks). Material is removed from the workpiece by a series of rapidly recurring current discharges between two electrodes, separated by a dielectric liquid and subject to an electric voltage. One of the electrodes is called the tool-electrode, or simply the ‘tool’ or ‘electrode’, while the other is called the workpiece-electrode, or ‘workpiece’.

PROUDLY MADE IN THE USA 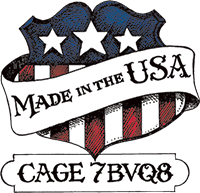